Timothy Soveral Hopkins and his son, Timothy A. Hopkins, were both incredibly influential in the development of the town of Amherst.  Both were active in the military and the public sphere: The elder Hopkins served as a brigadier general during The War of 1812, and his son served in the militia from 1828-1838.  Timothy Sr. served as the supervisor of Amherst from 1827-1830 and was the Justice of Peace from 1820-1852.  Timothy A. was the town supervisor from 1840-1843 and held the Justice of Peace position from 1841-1884.
While it may appear that the young Hopkins spent his life following in his father’s footsteps, that is not the case.  One of his most significant contributions to Amherst came in the form of a restaurant.  In 1857, he took ownership of The Eagle House, which is at 5578 Main Street.  Improving the appearance of the surrounding area was one of Hopkins’ chief concerns, so he ordered that a stone bridge be constructed over Ellicott Creek.  Though it took longer than anticipated to complete, the bridge was finally finished in 1882.  To celebrate the end of the project, the restaurant held an oyster social.  The gathering was such a success that it became a yearly tradition.  The Eagle House also played host for Amherst town board meetings and began attracting politicians from nearby towns and cities.
With these many achievements, it’s clear that the Hopkins did indeed deserve to have one of the main roads in Amherst named in their honor. 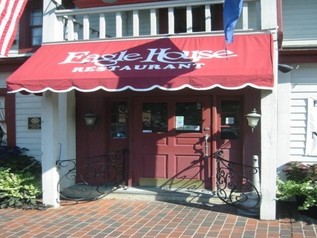 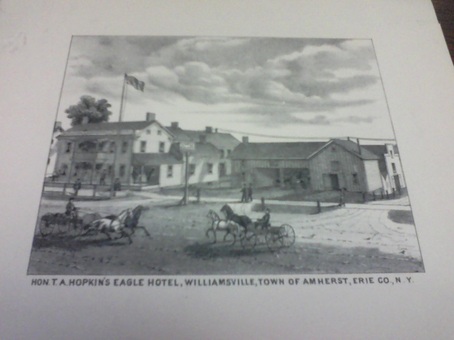