Before it closed in 1966, the Trinity Evangelical Lutheran Church served as a place of worship for many German speaking residents in East Amherst.  Frohe Art Glass installed Munich style glass to honor the community, as many volunteers helped raise funds for the project.
The Munich pictorial style stemmed from a revival of religion themed painting in the early 19th century.  This revival was a revitalization of the al fresco scenes that Raphael, Michelangelo, and other Renaissance masters produced.
The Frohe family’s skill was not limited to German style glass, however.  Leo P. Frohe shipped a three window set over to Paris for entry in the 1889 World’s Fair art competition.  Much to everyone’s surprise, Frohe[s effort earned him a silver medal in the Artistry and Architect field.  This accomplishment garnered attention for both Frohe and the American stained glass industry in general.  As one reporter remarked, “It is one of the first times that American glass, made by American workmen, in a distinctly American style…has competed with the glass of European masters and won.”  It was no small feat to win over both the judges and the general public-over half of the attendants of the fair were French.
Frohe Art Glass has also contributed their time and efforts to other churches in the area, as well.
The Transit Road Church 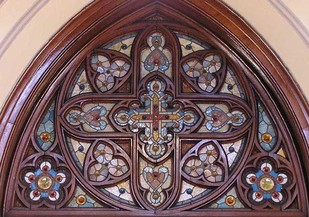 Stained glass window that rests over the entrance to the vestibule of the St. Louis Church in Buffalo.