BNHV’s first round of Victorian Seances!

Last night was the second Victorian Seance that was held at BNHV. The evening began with a presentation by Joel Dombrowski of Buffalo History Tours regarding the topic of death in the 19th century, how American culture dealt with the subject and the development of the Spiritualism movement.

Some common funerary practices included week-long wakes that took place in the deceased’s home and the ritual of sitting up with the dead to insure that the individual was actually deceased and not in a comatose state. When a corpse was buried, a string would be attached to the body’s hand and strung up above the grave and attached to a bell. This was done in case the person should wake. People were entrusted with the job of supervising the burial ground in case a freshly buried body should wake. Hence the commonly used term graveyard shift.

Dombrowski also discussed the practice of funerary flowers and their use to cover up the odor of the decaying body. Embalming did not become common in America until the Civil War when tens of thousands of soldiers where killed on the battlefield and shipped home to their families. Following the war, embalming became standard procedure. Hair would be cut from the deceased and used in many forms of remembrance including jewelry Post-mortem photography also became popular as a way to preserve the deceased through a memento. As the technology of photography grew in the latter half of the 19th century, it became common practice to shoot a still-life photo of a deceased loved one. Although macabre by modern standards, the Victorians especially would pose their deceased loved ones in both a death and life-like setting. Some were posed with other family members, some were posed playing an instrument, and some were posed standing up with the help of a body stand. 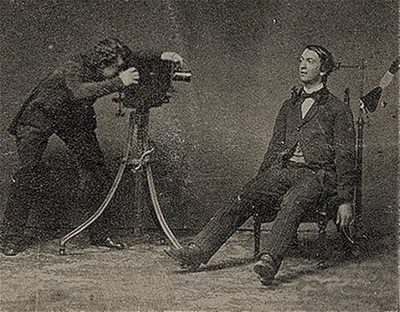 Example of a body stand. 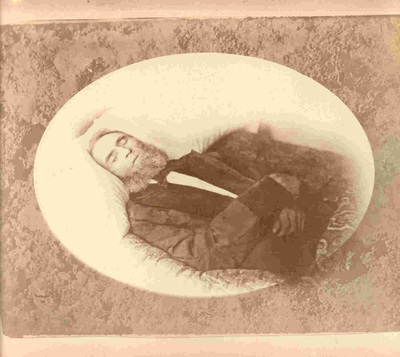 Post-mortem photograph from Buffalo Niagara Heritage Village's own collection. Courtesy of BNHV Archives.
Superstition played a large part in the rituals and customs of mourning culture. Black drapery would be placed on the doorway of a home in mourning. The custom of leaving the front door ajar was meant to welcome callers into the home who wish to pay their respects. Covering mirrors and family pictures was done to prevent the soul from “getting stuck in the looking glass”. This ritual is still practiced today in some religious and cultural groups. Bodies were carried out of the home feet first, as they are today, stemming from an almost ancient belief that the deceased must be kept from looking back at the home and beckoning other souls to follow.

World War I led to the demise of Victorian mourning culture. Society dissuaded people from practicing mourning rituals due to the massive amount of deaths that occurred during the Great War.

Spiritualism was a religious movement that began in the mid-19th century right here in Western New York. The idea of Spiritualism differed from hierarchical religious practices in that you didn’t need a priest or man of the cloth to talk with the spirit world and the beyond. This was especially appealing to women in Victorian culture as it did not focus on the male-dominated hierarchy of many religious orders. Spiritualism, which began outside of Rochester, NY, appealed to the leaders of the Women’s Rights Movement which also began in Upstate New York. Margaret and Kate Fox began experiencing the rappings and tappings of the beyond and believed they could communicate with the dead. The family soon abandoned their home, which they believed was haunted, and the Fox sisters took up residence with their sister, Leah, in Rochester, NY. From there, the sisters began communicating with the dead with groups across the state and across the nation. Their “teachings” and experience brought about the Spiritualism Movement and the practice of “speaking with the dead”. From this, a number of mediums and spiritualists stormed the mainstream of American culture. Buffalo, NY was a significant location for mediums, psychics, and other spiritualists. The Davenports, originally from Buffalo, traveled the world with their spirit box. The brothers would be tied up and put in this box which then produced musical sounds.
With the many spiritualists coming onto the scene, many frauds and skeptics also appeared. Harry Houdini studied with the Davenports in Buffalo and denounced them as frauds. Until his death, he argued that spiritualism was a false religion and mediums and psychics were only magicians in disguise. Soon a number of parlor tricks which had led people to believe in Spiritualism were exposed and many spiritualists were denounced. One of the Fox sisters even accepted a newspaper bribe and admitted that she and her sister would make the “rappings” and “tappings” by cracking their knees. She later recanted. Today, Lilydale, located in Western New York’s Chautauqua County, still serves as a Spiritualism center for mediums. 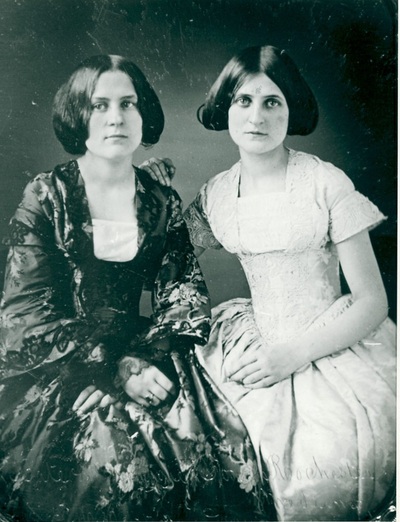 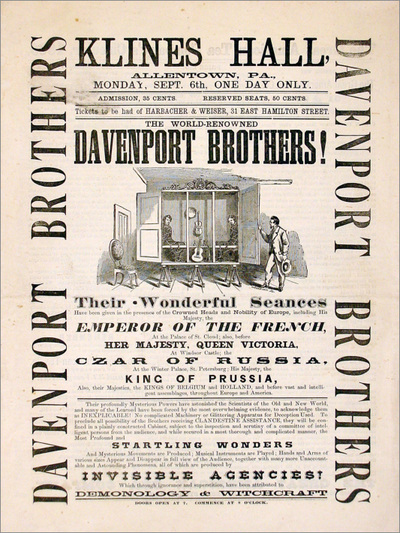 The Davenport brothers.
Following the presentation, the group of participants took part in a Victorian-style seance with the leadership of Glenn White, a local psychic medium. The table included a number of items that were and still are used for seances. They included a bell, a Ouija board, spirit trumpet, pendulum, and crystal ball. White discussed the practice and was able to describe a number of conversations with the spirit world. Nothing, or no one, appeared to the group, but a series of questions were asked and a handful of “taps” responded. So far visitors have enjoyed their experiences! 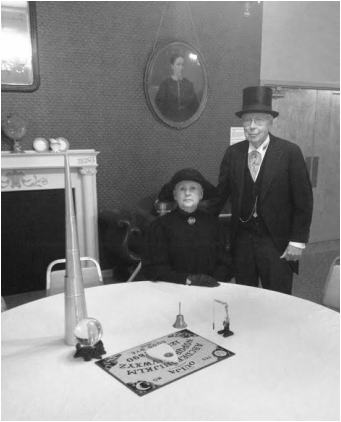