The Rise of Radio and the Boom of Blues

If you happened to stop by the Buffalo Blues and Brews Festival this upcoming weekend, you most likely shared your experience through social media, whether it was a status on Facebook, a photo on Instagram, or a video on Vine.  While the recent social media boom has allowed people to update friends and family with more information on their lives than ever before, it has not come without drawbacks.  In the digital age, newspapers and magazines are being eroded.  Even the radio, which contributed to the popularity of blues music in the United States, may not be safe from extinction.
The radio experienced monumental growth after the first commercial station, KDKA, was brought to life by Westinghouse Electric in 1920.  The company was the first to utilize the radio for broadcasting purposes.  The first broadcast announced the results of the 1920 Presidential election.  By creating interest in the broadcasts, Westinghouse Electric cultivated demand for radios by the general public.  This demand led to the sale of $60 million of radio equipment and accessories in America.  By 1924, that number jumped to $358 million.
Obviously, news stories could only take up so much time within an average radio broadcast.  To fill empty hours, stations turned to music.  Taking a gamble, they tried to turn Americans on to classical music and jazz, two unknown entities.  Spurred on by the success of the latter, blues music made its way on to radio stations in the late 1920s and enjoyed extended playing time through the 1930s with the advent of the portable radio. 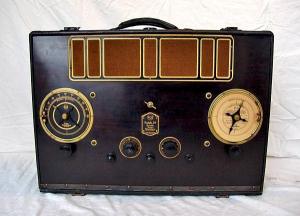